Sheila contacted us for saddles for her two Arabs, Will & Noddy. Both are six year olds and both had been backed the year before. To date they had been hacked out but looking forward, Sheila hoped to perhaps show them and/or do some endurance type riding.

Arabs are rather notoriously tricky to fit! To compound this potential problem, Sheila was finding it hard to find saddles in Germany for anything other than the Warmblood type and for anything other than dressage and jumping. Will is the more substantial type, wide, indeed very wide, and long striding. Noddy is finer, high withered and short backed. 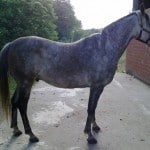 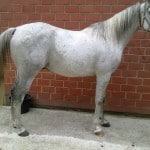 Arabs are notoriously tricky to fit!

Will was our first project! Sheila sent us a photo of the type of saddle she had in mind. There were various ways to arrive at this but given that the Ramsay tree works very well on Arabs, this was going to be our starting point. However, Will is very wide, so Ian had a long chat with Ideal and they strongly recommended that we use a Finesse tree. This is the same as the Ramsay but for wider horses. From the photos and video that Sheila had sent to us, it was clear Will was unwilling to go forward. It was very likely that the saddle being used was too narrow and could well be the problem or at least eliminating the saddle as the cause is the first step and hopefully the solution.

Much discussion then centred on flaps and blocks and seat depth. The saddle in the photo Sheila had sent us had dressage style blocs. Ian suggested that given that she wanted to use the saddle for working hunter, showing and general riding, a shallower, shorter block would give more flexibility and allow Sheila to ride shorter. The final spec was for an Ideal Finesse in Dark Havana with a medium depth seat, and GP blocks. The saddle would be fitted with point and balance straps to help stability.

The saddle arrived and “looks lovely”, said Sheila. However, Will was still not happy although at least he did not buck or kick out as he had done with his last saddle, said Sheila. We asked Sheila to send us some photos and hopefully a video so Ian could check the saddle was sitting in balance. Meanwhile, Sheila took great care to familiarize Will with the feel of his new saddle. Sometimes it can take a bit of time for a horse to respond. His behaviour is so conditioned by his past discomfort that it doesn’t change immediately.

However, in Will’s case, there was a different cause. It turns out he had a serious problem in a stifle. An operation and long box rest later. I’m relieved to say that there is a happy ending. Sheila is being cautious with him, but he is sound and in light work.

Now for Noddy! It must be said, Noddy is easier to fit!!! The spec for the saddle was very similar and everything went smoothly.

“Noddy loves being ridden. I am very happy with the saddles and find they are a perfect fit. I have seen made to measure saddles here that are twice the price.”

That Noddy loves being ridden is perhaps the best testimonial we can have!

Get advanced notice of special offers and our latest thoughts on saddle fitting.

We use cookies to ensure that we give you the best experience on our website. If you continue to use this site we will assume that you are happy with this.OkRefuse cookiesPrivacy notice
Revoke cookies